We are just over week away from Spring commencement, and while every graduation day is filled with wonderful stories of achievement and God's grace, this graduation day features a student story I will never forget.

Maria Alchammas arrived here from Syria in 2013, and next week, she will graduate with her Bachelor of Science in biology. As their home country fell into war, Maria's father sent his daughters, son and wife out of the country to save them. Maria and her siblings were enrolled in a Catholic school in Damascus; a school that became a bombing target for radical Muslim terrorists that had invaded Syria. As a young girl, Maria saw church friends murdered. Each day, every decision to shop or go to church or visit family was done in fear of a car bomb or a terrorist shooter in a public place.

Maria's parents made the difficult decision to send their children far away to save their lives. As Maria left for the U.S., the family had real doubt they would ever be together again.

Maria's mother and their youngest child were able to follow Maria into the U.S., but Maria's father, who was a dentist, was repeatedly denied a visa to leave. 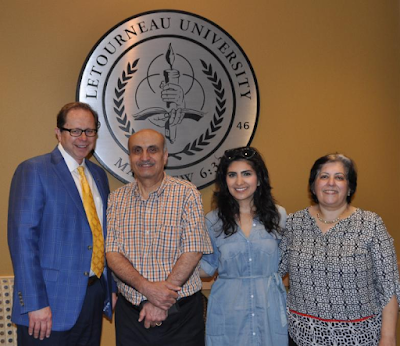 Over the years, many of us prayed with Maria that her father would soon be reunited with their family. Each day of her years studying at LETU, Maria would wake to check the death reports from Syria, fearing the worst for her father.

Just a few months ago, the U.S. awarded Maria's father asylum, and he has joined his family in Longview. It's an answer to prayer, and it came in time for him to see his daughter graduate.

As Syrian Christians, this family has horrors to tell. But, they now also have a testimony of God's grace in bringing them all back together again and safely away from danger. Thank you LETU for standing with Maria during these difficult years of her life. What was meant for evil in Syria, God will turn into good for Maria and her family and their new life in Texas.

The President's Page on the LETU Web site